How to Create the Perfect Man Cave for This Football Season 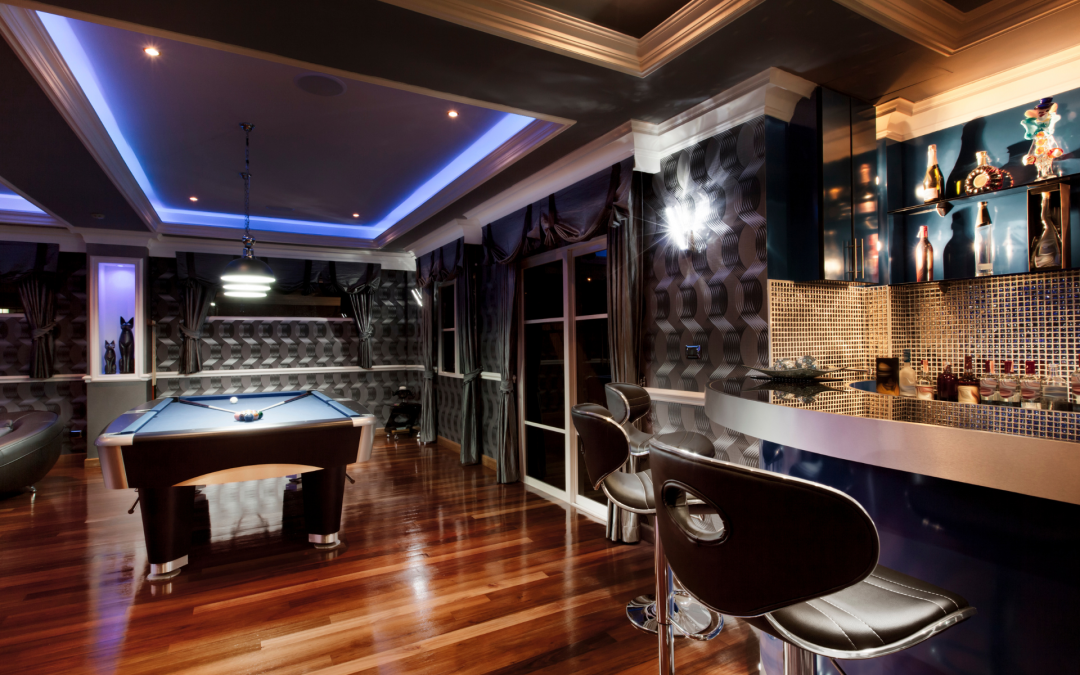 Believe it or not, “man caves” existed all the way back during prehistoric times. Archaeologists confirmed this after finding the bones of Buffalo pterodactyl wings and rudimentary beer pong tables deep inside in certain caves around Mesopotamia. (Source: It came to us in a dream.)

But why do men need their own special rooms? Because every man deserves a place where he can kick back, relax, and yell at the Minnesota Vikings without upsetting his wife. But you can’t furnish and decorate a man cave or game room with just any old furnishings and decorations. A man cave has to be fun – and that’s Paradise Patio, Pool & Spa’s specialty. Here are your man cave essentials!

You’re already exactly as handsome as Paul Newman when he starred in The Hustler. You’re equally as good at billiards, too, which is why you have every right to put a fine pool table in the comfort of your own home. You’ll never want to pump quarters into a bar’s sticky, worn out pool table ever again!

Our team has spent countless man-hours researching the best pool table for a man cave (many of which involved drinking beer). After all that work, we selected the Madison pool table by Presidential Billiards. It is a sleek, streamlined and compact 7′ table, made from solid African hardwood with 6″ rails that will support even your heftiest pals while they’re lining up impressive trick shots. The Madison’s 1″ three-piece K-pattern slate is diamond honed to perfection. It is so flat that you’ll only be able to blame missed shots on distracting television commercials.

Air hockey is just as fun as regular hockey – you just don’t have to wear musky padding and risk shattering your tailbone while playing it. And the way that little air current rises off its surface and blows in your face while you’re really getting into it? Pure heaven.

Paradise Patio, Pool & Spa proudly carries the finest air hockey table on the market. Made by Presidential Billiards, it is sturdy enough to endure endless hours of frantic play, light enough to be moved by two people, and compact enough to fit conveniently in any respectable dude den.

As dyed-in-the-wool Americans, we’re unashamed to admit that we don’t fully understand soccer. The sport would be far more efficient if the athletes would simply pick the ball up with their hands instead of kicking it, but maybe European men are just cautious about ruining their manicures.

Foosball, on the other hand … well, foosball we like. Twirling shish kebabs of little polymer guys and listening to a satisfying ker-THUNK whenever we score a goal never loses its appeal. That’s why we wholly endorse the Bolt foosball table by none other than Presidential Billiards. It is a regulation size foosball table, because apparently there is a foosball regulatory committee, with rotationally stable counterbalanced little polymer guys, SureGrip handles that won’t spin loose from sweaty hands, and solid construction which won’t give out under even the hottest contest.

Darts is one of the very few sports that is fun to play when you have absolutely zero idea what you are doing. But even if you’re good enough to score 501 points in nine throws, you’ll love how the Industrial dartboard cabinet by Presidential Billiards completes your man cave. Designed to hold either a digital dartboard or the old-fashioned kind, the Industrial features two chalkboards, convenient dart storage space, a whimsical backboard made from real wine corks, and durable solid wood construction.

Poker is one of the greatest games ever conceived. This is because there are two equally effective ways to win at poker: through intensive study of mathematical odds and human behavior, and lying.

Whether you like to stick your buddies’ disposable income into your pockets at the end of a night or just play friendly games of gin rummy with your family, your man cave isn’t finished without the Tyler game table by Presidential Billiards. The 54″ round poker table comfortably fits six card sharks, features just as many beverage holders, and comes with a matching onyx finish top so you can set out a buffet during the Super Bowl.

Now, you could go for backless bar stools, but these are notoriously easy to topple out of whenever you are shocked by a referee’s egregiously terrible call against your team. That’s why we recommend a backed bar stool, such as that made by Presidential Billiards. It is made of solid oak, complete with a sturdy metal foot rest and classy deluxe fabric on both its seat and backing. You’ll feel like you’re drinking Bud Light at the bar of a seven star hotel!

No man cave is complete without signs hung all over its walls. If your man cave’s signs don’t feature any of the following, then you may be fined $500 and imprisoned for up to one year under South Dakota state law 1985, ch 156, § 2:

When you’re furnishing the ultimate man cave in the greater Sioux Falls, SD area, you have to visit your pals at Paradise Patio, Pool & Spa. After reading this article you would rightly assume we carry Presidential Billiards’ entire line of high-quality leisure furniture and accessories. Come see what we have in stock at our showroom on 1200 W 41st St in Sioux Falls, or contact us today to ask how we can help you perfect your manly retreat!